Before summer, I was asked to build three interactive sculptures for Solfest by The Travelling Light Circus. Our aim was to produce three imposing sculptures with an interactive, musical function. In brief: Happy had two voice changing functions; Zappy was a large-scale version of one of my earlier dub sirens; Tappy was a large scale capacitive touch drum machine featuring 12 different samples. All ran from a single regulated 12V supply (hidden inside Happy). I’ll go a little into how each worked below. 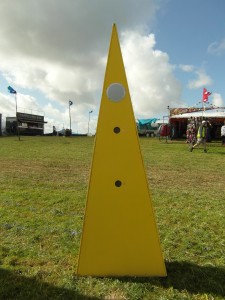 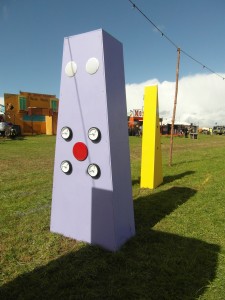 Zappy was, by far, the most complex as it used largely physical controls. I used another Arduino Due to generate audio from four large incremental rotary encoders of my own design. These were mapped to the oscillator frequency, modulation frequency, delay time, and feedback of the dub siren code. The trigger button was simply a large hinged panel with another waterproof button hidden behind it. I used the same amplifier and speakers as Happy. 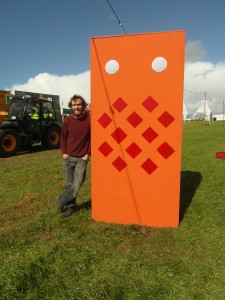 Tappy used a bare conductive touch board and some copper tape to create 12 touch-sensitive drum pads. I was surprised and pleased to find that the touchboard could register touches through the 12mm ply I was using – this enabled a seamless surface to be created. Minor changes to the touch board’s default code allowed samples to be played by single touches, and changing the samples was a simple matter of uploading new MP3s to a micro SD card. The touch board was piggy-backing on an Arduino as it could not regulate the 12V supply by itself (beware this, as there is some information to the contrary out there), and I used the same amp and speakers mentioned previously to output sound. 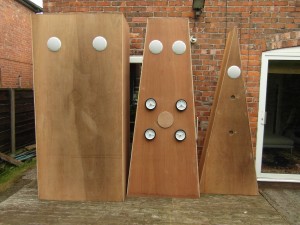 The three are shown above in their unpainted state – they were built to slot neatly inside each other for transportation.

12mm exterior ply was used as they were built to survive rain (which is to be expected at a British festival), although fortunately very little was encountered on the weekend. 2×2 timber was used to build the wooden frames each was based on. 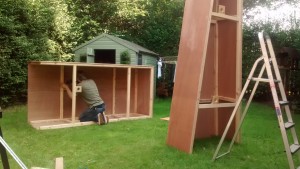 Unfortunately, I don’t have the time to document these in any more detail, but please feel free to contact me by email or comment if you have any questions. 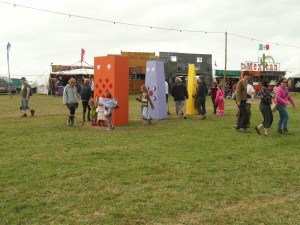 2017 edit: These sculpture have now been on several outings, and they are still standing up to the worst that the British summertime/public can throw at them.