So, if you’ve read my earlier posts, you’ll know I’ve been working on a more musically flexible framed laser harp, mainly achieved by adding functionality not usually present in these devices. At this point, I simply wanted to improve the look and performance of what I had already made.

I decided to invest in some more standard and stable laser diodes, that I purchased from a wholesaler in China. These took more than a little while to be delivered (close to 6 weeks), but when they arrived, I was pleased to find they exactly suited the project. They were generally more consistent with regards to brightness and collimation than the lasers I’d been taking from cheap laser pointers. 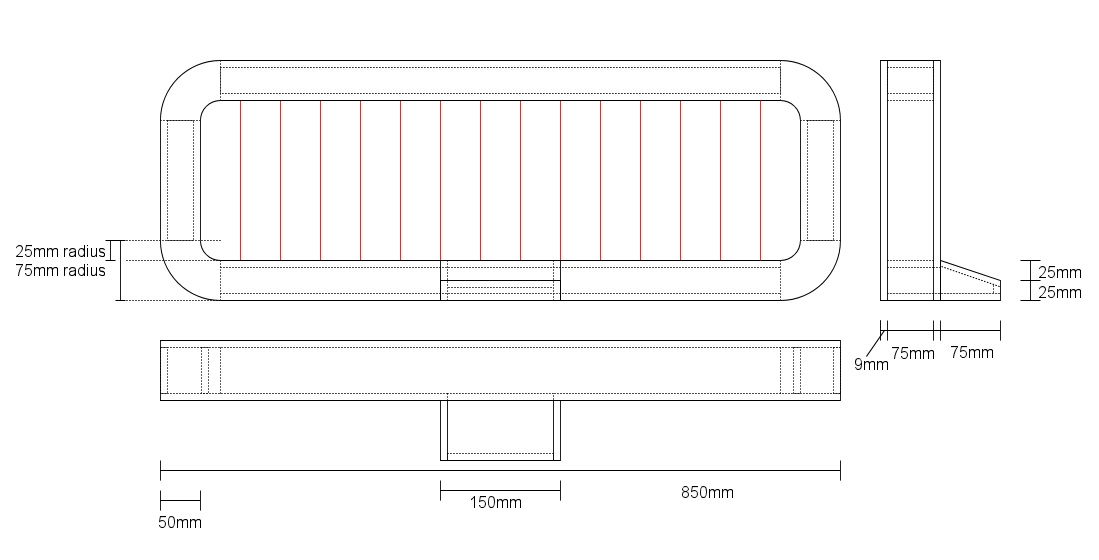 Working from the plans above, I built another (MDF) frame to house everything. This took a lot longer than the previous model, as the frame was glued, rather than screwed, and working out a simple, easily repeatable way to create the curves at the corner (with limited tools) was surprisingly the largest challenge I’d encountered so far.

Other than being a little neater (lots more sanding), and including an extra set of buttons to control octave shifts, this version of the harp is essentially the same as the first. The improved quality of the lasers had the bonus of making the velocity sensitivity of each note a little more effective. 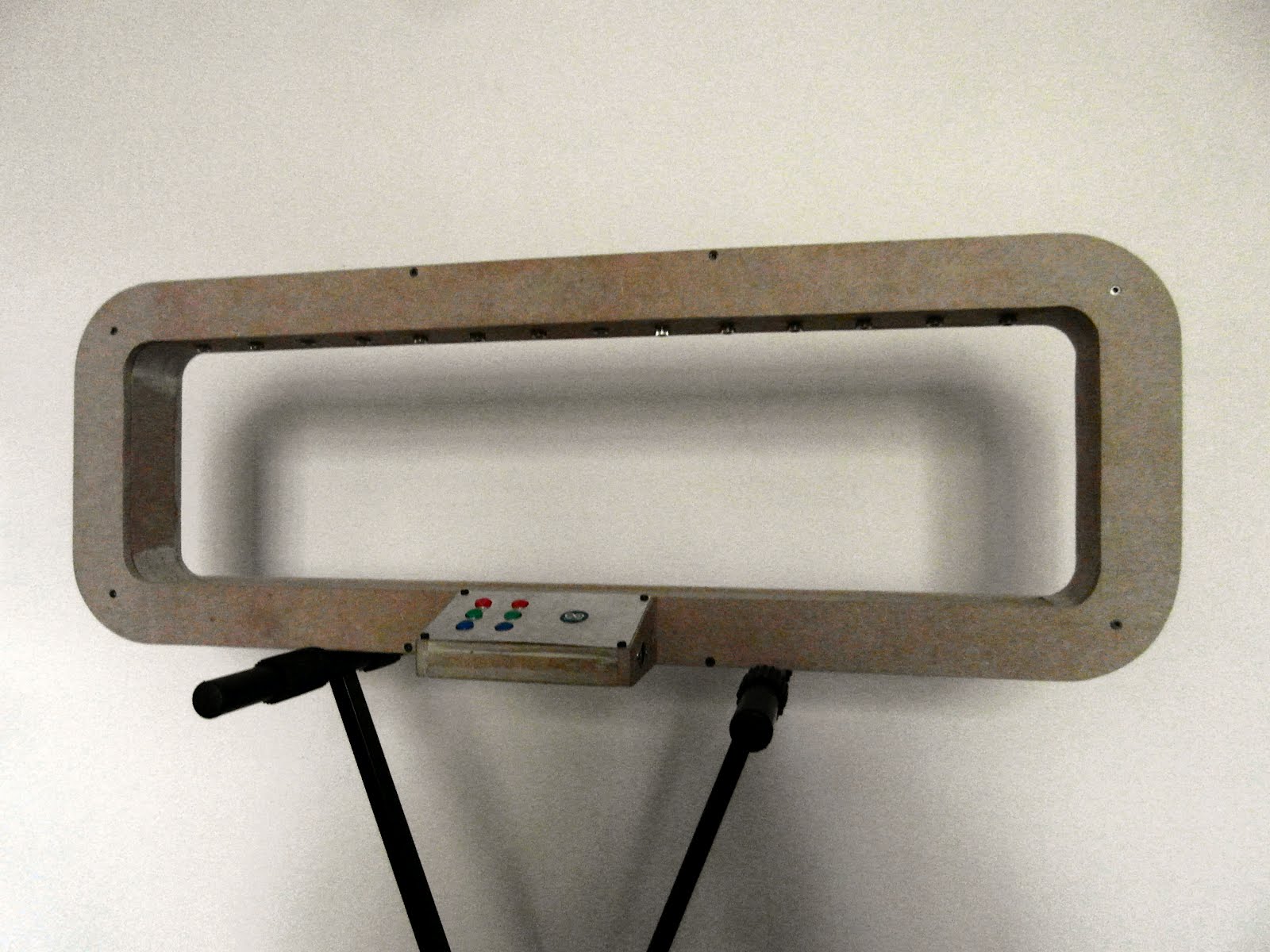 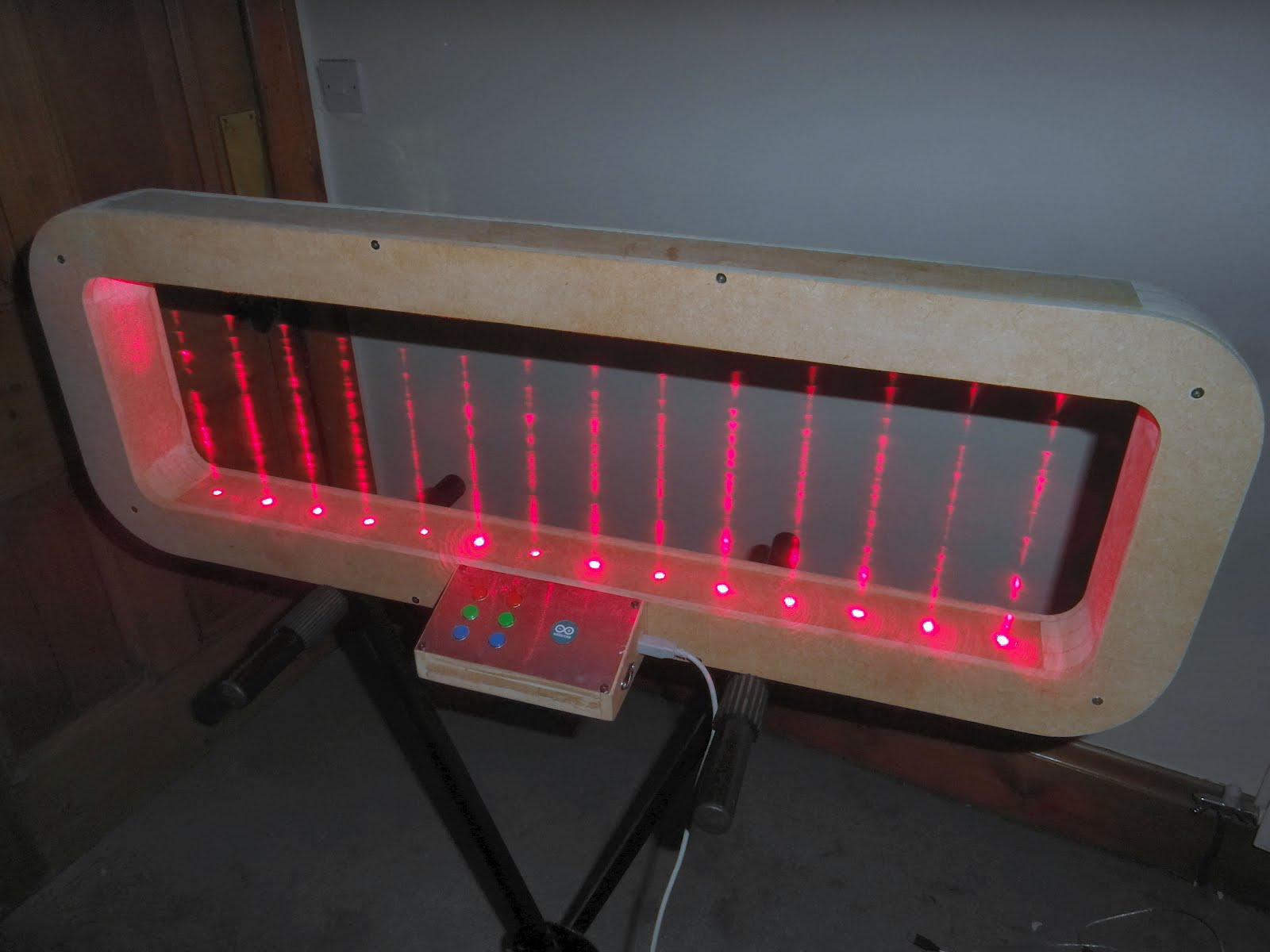 Laser Harp mk 2, powered, long exposure while I played with the beams

So here it is! The only thing left to do is paint for a final finish, and I might even leave that for the next model, as I’m kind of fond of the way this particular model is looking. You’ll notice the above image is a long exposure: I wanted to show a little more clearly where the beams are – they’re not really that visible in a well lit room. I chose to use low power beams as the lasers used in large stage laser harps are fairly dangerous – looking directly into the beams can burn your retinas instantly, or burn your skin if you choose not to wear gloves while using it.

Using lasers with an output <5mw (as I do) are bright enough to give the impression of interacting with light, while being low powered enough that you’d have to stare directly into the beam for several minutes before anything bad happened. This means I (and anyone else) can use it without specialised eye & skin protection.

I will (hopefully) be presenting this version at the MOSI mini maker faire in Manchester in July, so if you live nearby you can see and use it for yourself. Feel free to come along and try it out! I’ll be bringing along a couple of other gizmos I’ve created, of which I’ll write about another time.

P.S. I’m intending to put up a couple of videos of this thing in action, but in reality, an instrument with no haptic feedback whatsoever is a little difficult to play – it might be a while until I get a demonstration I’m happy with!